A three-storey laboratory and production building jointly used by ABNOBA and Carl Gustav Carus-Institut was planned. Detailed reports on this can be found in the issues of the „Öschelbronner Akzente“ of the years 2017/18, 2018/19, 2019/20 and 2020/21.

We moved into this new building at the end of November 2020. We moved into a spacious, light-flooded new building, friendly, bright offices and laboratories, to the east with a view of the existing buildings, as well as the clinic and Johanneshaus, and to the west with a fantastic view of Öschelbronn with the Kirnbach valley to the river Enz and the city of Pforzheim. The move went extraordinarily well and smoothly over 2 days. Below are some pictorial impressions from the time of completion and the move, as well as a small drone video showing aerial shots of the entire building - new building with connected existing building - and in the background on the left the Johanneshaus, in the middle the Öschelbronn clinic and on the right behind the new clinic building. Film and photos of the drone by Mr Thum (employee of Abnoba GmbH) were taken at the beginning of September 2020, towards the end of the shell construction phase. Here you can watch this 1 1/2 minutes video.

Furthermore we have prepared a short virtual tour of the new building.

You can watch this video (German) of approx. 4 1/2 minutes here.

An actual drone flight video - also made by Mr Thum - from August 2021 shows our new building embedded in the "Eichhof-aerea" together with Johanneshaus and Öschelbronn Clinic from above 9 months after our move and start of work in new premises. You can watch this video here.

The date for the inauguration of the new building of Abnoba GmbH and Carl Gustav Carus Institute, Allmendstr. 55. 75223 Niefern-Öschelbronn, was scheduled for Saturday, 8 May 2021.

Unfortunately, we had to postpone this date due to "Corona".

We will announce the new date here in due time.

The construction site was set up at the beginning of October 2018. On October 8, the employees of ABNOBA and the Institute met there for the "ground-breaking ceremony". The very next day, the excavators began digging the building pit.

On 5 July 2019, in bright sunshine, the foundation stone for the new building for cancer therapy research and the production and distribution of the mistletoe product abnobaVISCUM® was laid in an internal festivity.

Michel Barkhoff, the managing director of ABNOBA, emphasised in his welcome speech, that the new building is intended to lay the basis for the future and that the many children present are therefore the most important guest. ABNOBA and Carl Gustav Carus-Institut ask for a loving and focused support of the construction by the present guests. The impulse to develop this mistletoe drug and to make it available to patients and doctors was and is a non-commercial one.

Dr. Hartmut Rieß transmitted on behalf of AnthroMed, Klinik Öschelbronn and the Medical Section at Goetheanum congratulations for the construction of the building and the continuation of the cooperation of all institutions. He pointed out the common effort of all those working in anthroposophical medicine to see the nature of cancer as a human task and to accompany patients with their hearts. Prof. Dr. Walter Hutter spoke as chairman of the Gesellschaft zur Förderung der Krebstherapie e.V., from which Carus-Institut, ABNOBA and Klinik have developed over the last 50 years. He expressed his pleasure about the intensive cooperation, which leads here to a joint construction planning.

Michael Feles, the former Technical Director of ABNOBA and the previous chairman of Gesellschaft zur Förderung der Krebstherapie e.V. pointed out that the scientific production of medicines has its origins in the monasteries and temples of earlier cultural epochs, and that Rudolf Steiner teaches modern man the connection of healing with the spiritual world, which may be present in the new house.

Dr. Hans Werner focused on the origins of the foundation impulse and the personality of Thomas Göbel, who has devoted all his energy to building up the Goetheanistic research impulse in cancer therapy.

For the foundation stone, ABNOBA and Carus-Institut had chosen four minerals as representatives of the four elements of earth and man, solid, liquid, air and heat. For this purpose, a cubic schungite formed from carbon, a colloidal agate, a birefringent, rhombohedral calcite and a tourmaline formed from heat were used. They were placed in the vessel of the foundation stone together with 8 ampoules of the medicine abnobaVISCUM Fraxini 20 mg and the daily newspaper.

Dr. Gero Leneweit, head of Carus-Institut, pointed out that in addition to these visible elements, of which the building is composed, invisible elements are necessary for the successful cooperation in the house.  The fundament of this invisible house is mutual trust, its inner cohesion is appreciation, the power rising up to the sky is enthusiasm and the sheltering roof is gratitude. Thereupon the insertion of the foundation stone into a hollow, which was covered with fresh concrete, followed. The ceremony was accompanied by the Bach cantata "Jesu bleibet meine Freude", performed with wonderful lightness by Dietmar Steinert.

Peter Gloss, the architect, then guided through the shell of the building in the basement and on the ground floor and explained how the space to be created was first inserted into the relief of the landscape. Then the functional needs of all working areas were considered. He pointed out the high value in the selection of all functional and design elements and evoked anticipation for the completion of the building. 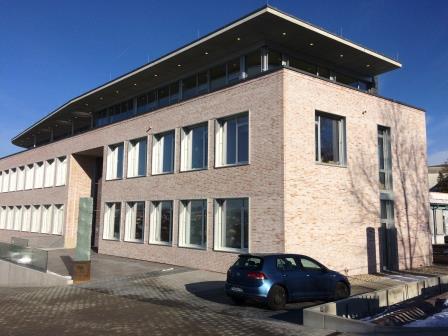 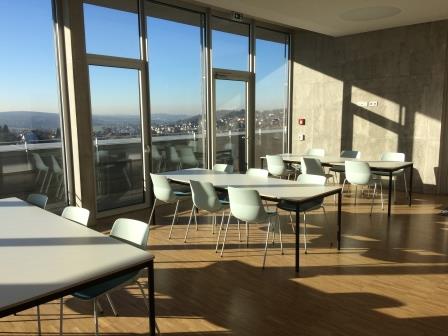 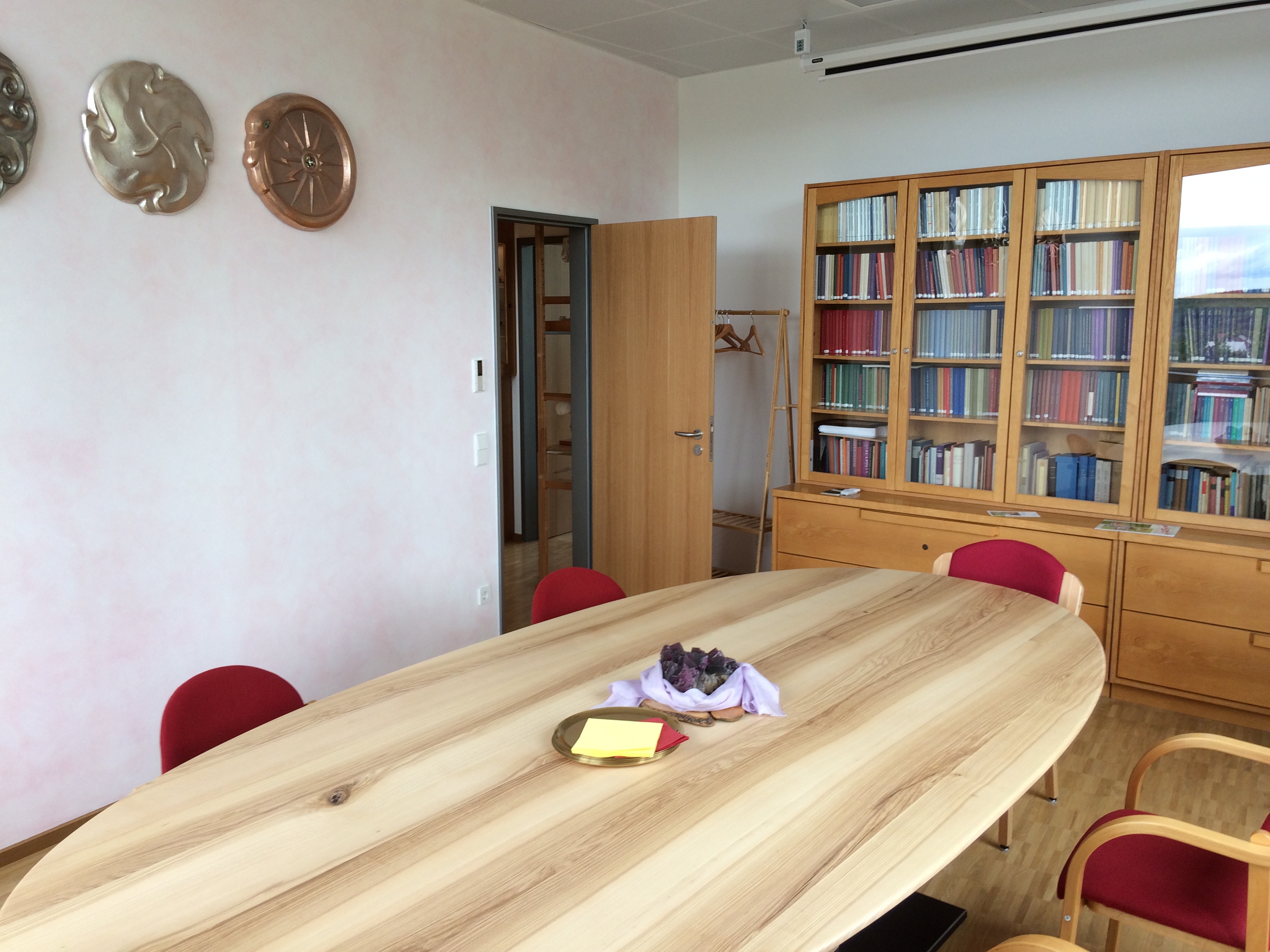 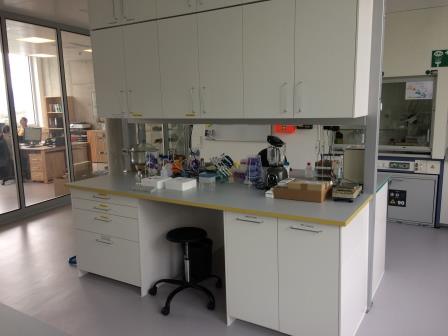 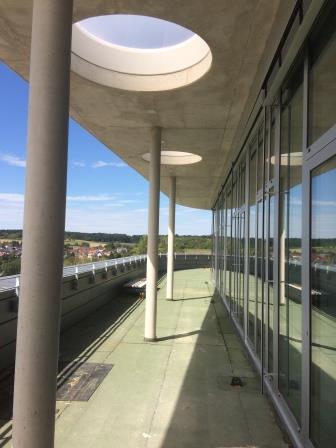 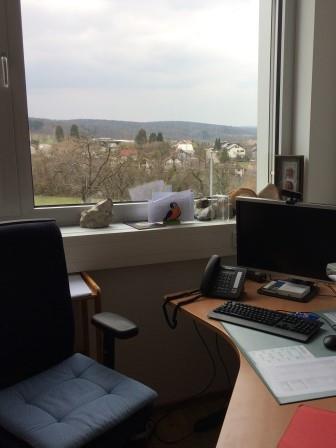 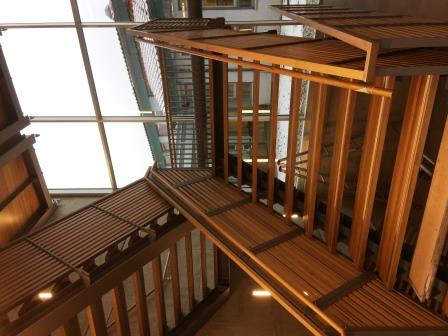 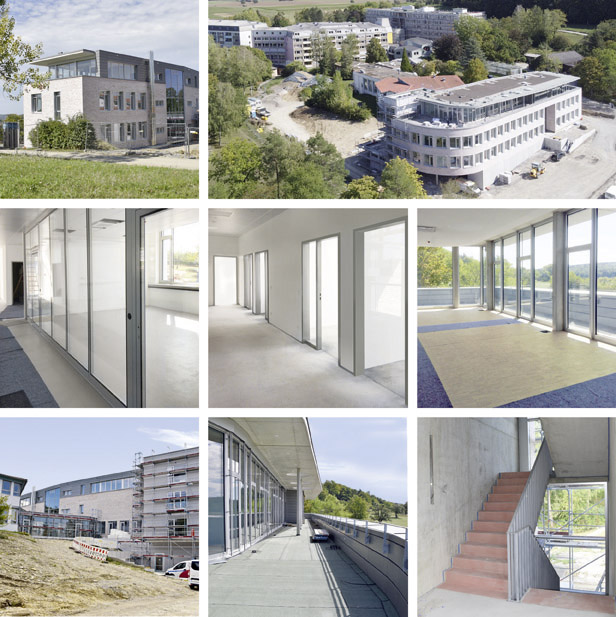 Photos of the laying of the foundation stone on 5 July 2019. Link to the report (German).